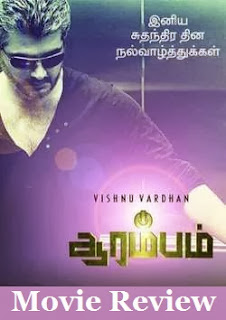 Ashok (Ajith) is wanted by the police for three blasts in the hub of Mumbai. Spreading the typical Mumbai mood in Tamil style, Thala dances to his introduction song in all vigour. Meanwhile,college alumni Arjun (Arya) and Maya (Nayanthara) encounter each other on a business trip and travel down the memory lane. While there is not much to remark about Nayan's flashback to be amiss from her trademark glamorous beauty, Arya's college boy look is a serious set back. The flashback describes how Arya managed to impress the bubbly reporter Anita (Taapsee).

What comes later is total high tech action! When all the niceties are over, Arya gets duped into Ajith's plan of hacking one system after another - beginning with the flash network. Hacking people down at each step, Ajith gets closer to his ultimate goal. But all that comes to a sudden stop when he gets arrested by the police, as a result of Arya's smart and secretive complaint. With each passing frame, there is more action than you can ask for. Before revealing the motive behind each casting, the first half comes to an end with a classic action sequence. It is after Ashok's arrest that the real story unfolds, in the second half.

After the interval comes the real twist. If you thought the first half was impressive, the second is full of adrenaline with class action back to back. It is in the second half that you should watch out for the much awaited car action sequence. The story takes a new avatar in impeccable screenplay in exotic locations. The film as a whole boldly involves a lot of aspects of the country's everyday affairs which is considered delicate to speak frankly. Vishnuvaradhan scores high on this regard that he has taken up a delicate issue, offered an uptight solution in completely action-filled entertainer.

To perceive the complicated story that Subha has penned down, and put it on neat and interesting screenplay is quite a task, and Vishnu has added the right amount of salt and pepper to make the film a merry to watch and enjoy. Om Prakash has canned each frame with passion. Every fight sequence appears realistic, and all the nuances and emotions have been captured just in the right light. Differences in screen setting and lighting have been taken utmost care to convey the right emotion, not just through the carefully worded dialogues, but also visually.

Ajith has done a truly great job in the movie - more than a hero (or anti-hero, as he is cast), he has performed as the typical character that Subha and Vishnuvardhan have conceived. Carrying himself at ease in the contradicting roles he plays in both the halves of the film, Ajith proves his worth once again as an excellent actor. Nayanthara who comes around as his ally has added the right amount spice wherever required. The actress seems to have distinctly matured from her 'Billa' days, though.

The romance that Arya and Taapsee share is cute, bubbly and keeps the movie going forward on a lighthearted note. Though Rana Dagubatti and Kishore are cast on brief roles, their characters are pivotal and support the crux of the story strongly. Cohesion and continuity is edgy and distinctly better only as the film progresses. Srikar Prasad has however done a commendable job in putting the pieces of action together into thorough entertainment. Background score adds volume to the story, supporting it substantially well.

In all regards, the second half is exceptionally good. 'Arrambam' is about making the wrong, right and making it look simple, despite the weight and weightage the story carries. By all means, the film is truly a class apart, with the same style and mass of Thala. So here's wishing everyone a blast of a 'Thala' Diwali, the classic Ajith way!